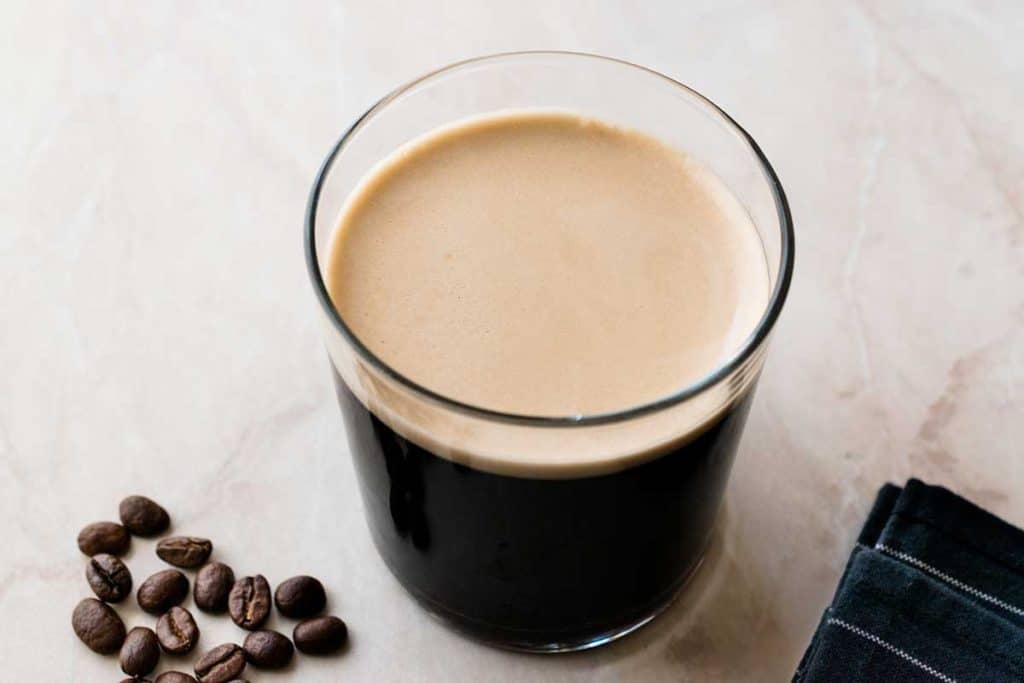 Nitro cold brew coffee amassed a cult following quickly after its recent discovery, and justifiably so. It’s a relatively new beverage, and in an effort not to be left behind I have learned how to make nitro cold brew like the pros too.

I imagine that’s what brought you here as well; you want to get the brewing process right and make a fancy beverage you can be proud of. Well, I’ll make sure this dream can come true for you in just a short while.

There are really only two main steps to the process. First, you have to make cold brew coffee. If you don’t already have one, you may need a cold brew coffee maker for this. Second, nitrogenize it. This guide keeps it simple and straight. No long-drawn-out steps and coffee jargon!

To start off, let’s learn a little bit about nitro cold brew coffee.

What Is Nitro Cold Brew?

As a name, nitro cold brew is fairly self-explanatory. The ingredients are basically cold brew coffee plus nitrogen (N2). Brew your coffee with cold water, infuse it with nitrogen gas, and bingo! You have the much-hyped nitro cold brew.

Nitrogen is the magic behind the foamy top this drink is popular for. In the past, only dark beers such as lagers, ales, and stouts had this visual element. Guinness leads the pack! Even today, bartenders still use nitrogen instead of carbon dioxide (CO2) to give beers a rich creamy head, because N2 bubbles are smaller than those of CO2 and give the brew a smoother, sweet taste that drinkers and coffee purists find appealing.

Experimenting baristas in Texas are credited with the invention of nitro cold brew in 2012. Fast forward to several years later, the drink is now a favorite for patrons in specialty cafes and coffee shops. Cans of nitro cold brew can also be found in grocery stores.

Those are not the only options at your disposal. You can create nitro cold brew at home and make it just as sweet and smooth as that from your favorite store, and I’m going to tell you how to do it.

How to Make Nitro Cold Brew at Home

You can skip this step if you already have coarsely-ground coffee. For those yet to purchase, mention to the vendor that you would like a medium-coarse grind. If you have fresh whole beans, use a coffee grinder for cold brew coffee to prepare your beans. 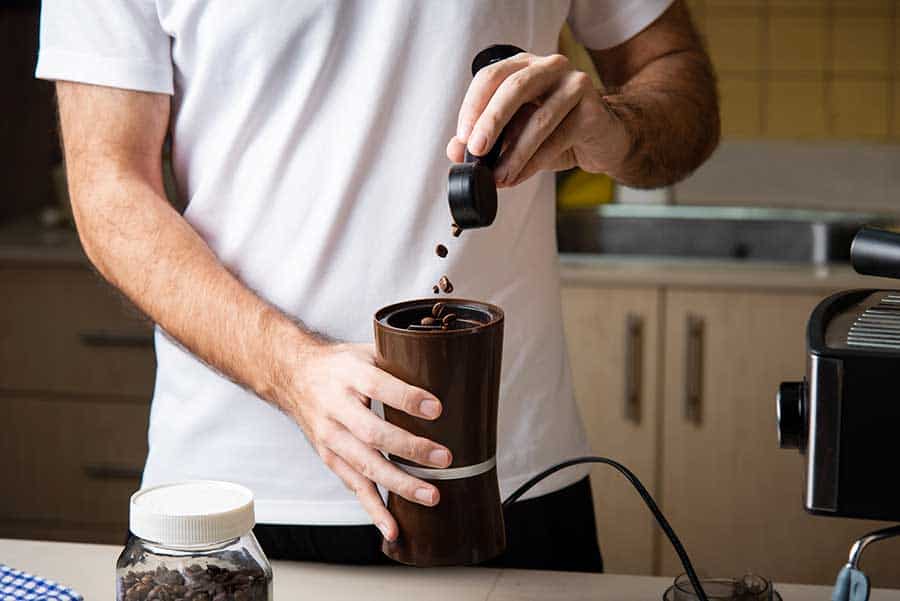 One ounce of coffee and 4 ounces of water (1:4) is the average ratio coffee purists use to make cold brews, but you could scale it to your own preferences, depending on how strong you would like your coffee concentrate to be.

Mix the two with a plastic spoon in an airtight container. Using metal utensils or allowing too much air into the container can oxidize the coffee and yield unintended flavors.  You could use a mason jar, wine jug, or a special cold brew bottle.

The other alternative is to use a French press because it saves you the need to be cautiously attentive to air volume.

Leave the mixture to steep for about 12 hours at room temperature. Alternatively, you can store the mixture in a fridge and let it sit for up to 24 hours.

Step 4: Filter Out the Coffee Grounds

Before you start the filtering, first shake the container to stir up the contents. You want the concentrate fully mixed before you strain it.

Next, filter the coffee using a mesh filter screen lined with a traditional coffee filter, cheesecloth, or nut milk bag. You don’t want bits of coffee floating around your concentrate later. If not satisfied with the result, you can repeat the straining until there are no leftovers.

You could do this either using a whipped cream dispenser or a mini-keg. They work differently, but each has its unique pros and cons.

Then pour your cold brew into the dispenser, seal the can tightly, charge it with a nitrogen oxide cartridge, and shake it for about 30 seconds.

Let the coffee sit for another 30 seconds before serving it over ice.

Whipped cream dispensers are cheap and simple to use, but you will have to use nitrogen gas cartridges to infuse gas into your cold brew.  Also, you will have to release the gas one or more times after serving to ensure no air remains in the whipper.

Mini-kegs, on the other hand, are more expensive, available in different models, can store more coffee and gas, and effectively lock in all the nitro flavors. Not all models have nitro capabilities installed, though. For those that lack this feature, you will have to use a nitro conversion kit.

Follow the instructions on your mini-keg model for guidance on how to infuse your cold brew with nitrogen.

If you can’t wait 24 hours, there’s a quick method you can use to make nitro cold brew. Although the concentrate won’t be as strong as the one that was extracted for 24 hours, it still does the job. 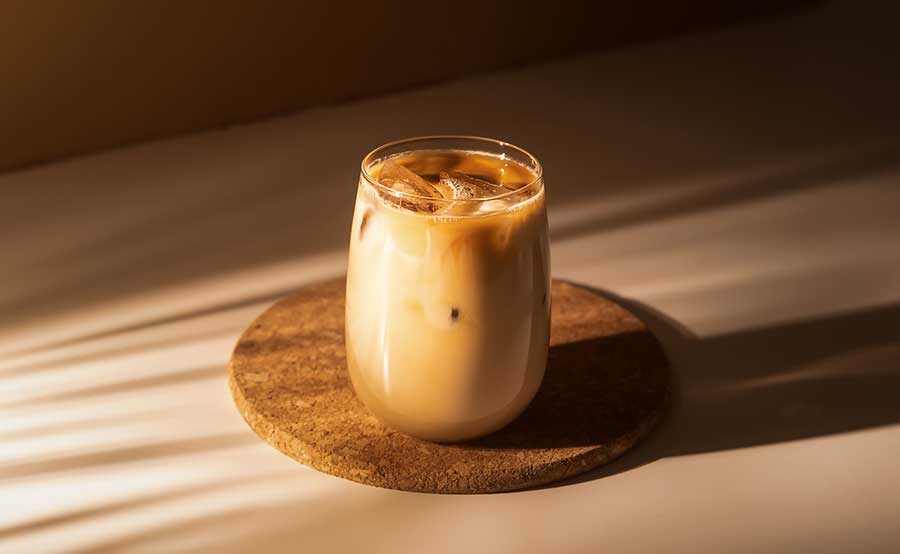 This process takes 5 hours, tops. Check out the steps below:

Step 1: Mix coarsely ground coffee with water as you would while preparing a cold brew.

Step 2: Charge it with two nitrogen cartridges, shake for 30 seconds and let it sit for 5 minutes.

Step 3: Depress the trigger lightly to discharge some gas while holding a glass or cup over the nozzle to avoid a mess.

Step 4: Charge it again with 2 more nitrogen cartridges and shake.

Step 5: Let the mixture stand for about an hour and then repeat step 3.

Step 6: Open the canister and filter the coffee into a jar.

Your beverage is ready to serve!

Top on the list of things that make nitro coffee different is the luxurious mouthfeel. It is smoother and sweeter than regular iced or cold brew coffee and has a creamy texture that many coffee lovers cherish.

You may have noticed that most bottled or canned coffee beverages use citric acid as a preservative. While it does the job, an unfortunate side effect is that it takes away some of the drink’s original taste. Nitrogen, on the other hand, doesn’t affect the integrity of your drink’s flavor.

Just like citric acid, nitrogen helps your drink stay fresh longer; however, nitrogen replaces oxygen without taking away the original flavor. Oxidation is one of the things that can destroy the good quality of your coffee, denying you all the nice flavors you had anticipated.

How do you make nitro cold brew stronger?

To make nitro cold brew stronger, either use a higher coffee-to-water ratio or let your coffee-water mixture steep for a longer period of time before straining it.

To adjust your steeping time, 24 – 28 hours would be fine. If you let it sit for longer than that, over-extraction will occur and this will also affect the taste of your brew.

To adjust your ratio, while we suggest starting at 1:4, the highest typical ratio used is 1:8. This will give you a much more concentrated brew.

The extraction time for cold brew coffee is also longer than for regular coffee. Steeping your grounds longer will definitely get you more concentrated coffee.

Both, however, have the same health benefits, although some scientists argue that the gas in nitro cold brew leads to faster caffeine absorption which would explain why you get your caffeine boost faster with this drink compared to regular coffee.

In a Nutshell: How to Make Nitro Cold Brew

It may be tempting to skip all these steps and buy nitro cold brew straight from a coffee shop or grocery store, but this is going to be expensive in the long run and is still time-consuming, but in transit time as opposed to brewing time.

Also, you will be denying yourself a chance to become the master of your own happiness. Picture yourself making nitro cold brew, how and when you like, in the comfort of your own kitchen. Wouldn’t you love that?

And no, you don’t need barista-level skills or knowledge to whip up a cup. Just make sure you have all the ingredients and tools needed for the process. Follow the five steps I discussed earlier and in no time, you will have a sweet, smooth, creamy beverage ready to serve!