An espresso machine is the quintessential coffee maker with a lot to offer, but despite all the great things about it, you may also be eyeing a Moka pot. So in this article, we’ll be comparing a Moka pot vs an espresso machine and delving into how these two brew extraction methods are different, as well as the advantages and disadvantages of each.

I’ll not only walk you through all of them but also share some history just to put everything into perspective.

The main differences between the Moka pot vs espresso machine are:

Both are designed to make concentrated coffee, but high pressure makes espresso makers brew a more intense coffee with complex flavors. Therefore, the go-to option for that flavorful extraction is an espresso machine.

You must be aware by now that espresso makers don’t come cheap, so what happens when you lack the budget for one yet you still want to experience that strong concentrated coffee? Moka pot is the answer!

Low cost aside, if you prefer a coffee maker that is more portable and easy to use, no other coffee maker will serve you as diligently as a Moka pot will. For great results, opt for one of the best Moka pots.

In the rest of the article, I’ll dig deeper to fully understand the difference between a Moka pot and an espresso machine.

Now that you know the basics, now let’s delve into the specifics, starting with some background information about the two brewers.

First things first, the name “Moka” was derived from Mocha, which is a city in Yemen that was an important coffee capital. However, it was the Italians who invented this precious coffee-making unit and named it the Moka pot.

It all started with the creation of the Bialetti Moka Express in 1933. Alfonso Bialetti was the brains behind it. Several models have been developed since then, leaving coffee users spoilt for choice.

In Italy, the Moka pot is an ever-present appliance found in every kitchen. It’s actually a significant part of their rich coffee culture. The rest of the world,  particularly parts of Europe and North America, have fully embraced it too, mostly because of its simplicity and ability to quickly brew a full-bodied cup of joe rich in flavors and aroma.

For espresso lovers, this is the closest you can get in your search for a cheaper alternative that can make intensely-flavored coffee that’s almost as full-bodied and bold as espresso.

Despite being simple, with only three components ( a boiler, filter, and collector), the Moka pot is not the easiest coffee maker to operate. You have to get a few things right for it to make you that desired brew.  Before you put it to use, it would be great to take some time to learn how to use a Moka pot.

Some great options that have stood the test of time include:

Espresso, too, originated in Italy. Angelo Moriondo, a Torino-based industrialist, made the first espresso maker in 1884 but he did not commercialize his idea. Another inventor based in Milan, Luigi Bezzera, adopted the idea and patented it in 1901. 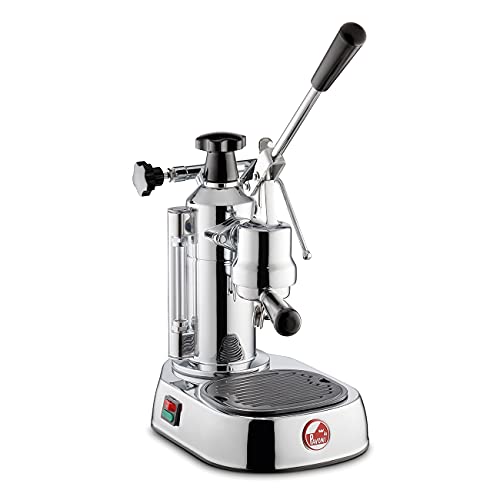 Back then, an espresso maker was just a vertical cylinder comprising a brass water boiler whose high pressure was kept high with a gas burner. Boiling water and steam would then be passed through the equipment, containing coffee for extraction.

A level system was invented decades later by Angelo Gaggia. The fully manual lever-operated espresso machines then became the norm in 1945. Fast forward to today, and extraction is now done with pressure generated from pumps.

More clever inventions have since been made to make espresso makers perfect. From temperature control and automated grinding and tamping to the addition of steam wands, espresso machines have come far since their original invention.

Espresso machines today have more complex parts and work in different ways. Near-boiling water is usually forced through coffee grounds under high pressure to quickly create a tasty shot of espresso rich in flavors and aroma.

Most coffee lovers would rather have a modern espresso machine because of how it effectively brings out the unique flavor profile of different coffee beans. Your average coffee maker or old espresso maker can only be half as good in achieving the same outcome.

Some espresso makers, like the automatic models, have a steeper learning curve. You may have to do the grinding and tamping, but superautomatic machines will save you all the trouble. Every task is automated to precision to remove the guesswork from the brewing process.

Regardless of the style you choose to go with, here are some interesting options you can count on for exceptional performance and brewing outcomes:

Back to the earlier question: what is the difference between Moka and espresso? To fully answer that, here’s a thorough comparison of the two.

As much as these two masterpieces use pressure for extraction, how they generate it is different. The levels aren’t the same either. 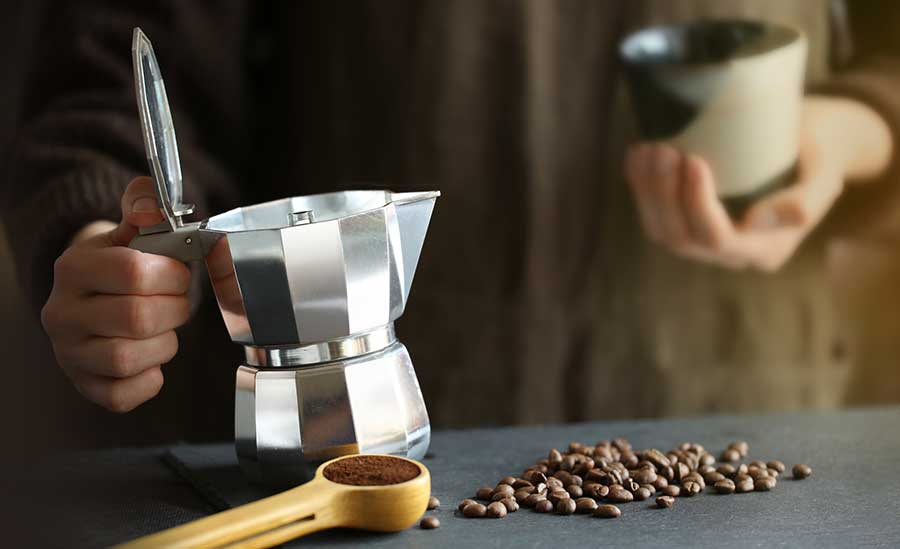 As I told you earlier, Moka pots generally have three chambers. The bottom stores water, the middle one holds coffee grounds, and the one on the top collects the brew.

Once the bottom two chambers have been properly loaded with coffee and water respectively, the Moka pot is placed over a heat source to boil the water. The resulting steam then creates pressure in the lower chamber which pushes the water up and through the middle chamber/filter basket.

At this point, coffee is extracted into the upper chamber. All in all, the extraction will take a few minutes, and timing is key to an optimal extraction. 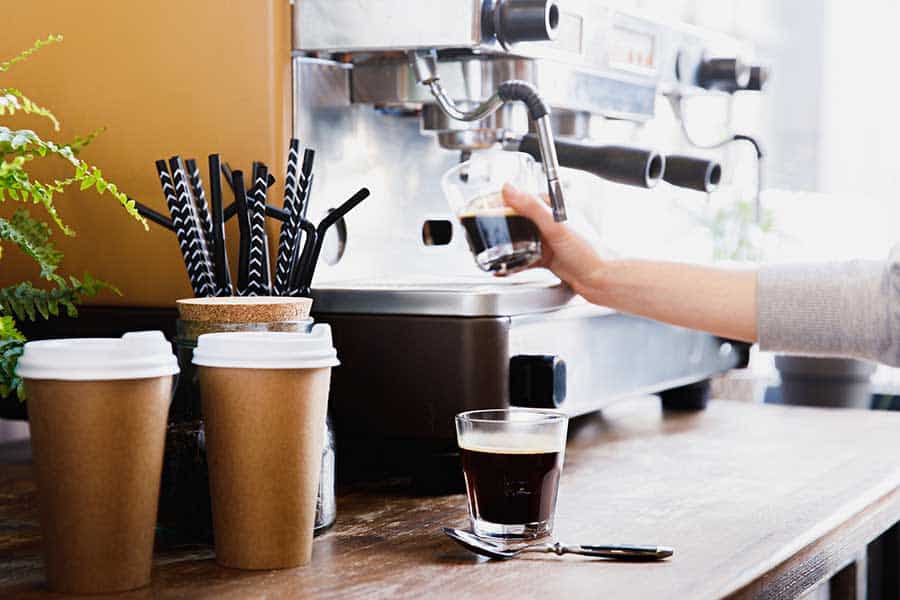 Espresso machines have lots of parts, but the three main components that run the show include the water boiler, portafilter, and group head. Bean preparation varies from machine to machine, but extraction is the same across the board.

Pressure is generated by pumps and is high enough for optimal extraction. Most espresso machines rate theirs at 15 bars; however, 9 bars is the recommended average that guarantees the best results.

Because of the high pressure, espresso makers are able to extract coffee in seconds and bring out the much-desired flavor and aroma.

To Sum Up: These are two different extraction methods resulting in two different beverages. Both require some technique to be able to deliver something drinkable.

Because of their simplicity, it’s easy to assume that operating Moka pots is a walk in the park but that’s not exactly true. First of all, you have to get the measurements right (for water and coffee grounds). Heat and pressure have to be regulated, too, to avoid under-extraction or over-extraction.

It may take time, effort, and skill to get to a point where you can be consistent from brew to brew, but it’s easily doable if you are committed to the brewing process.

Operating espresso machines, particularly the super-automatics, is a breeze. Once you have loaded beans and water into the unit, your work is 80% done. You only have to select your preferred drink settings and press a button to brew.

However, anything other than a super-automatic will require some knowledge and skill on your part. Semi-automatic and automatic espresso makers will do 50% of the work for you. You might have to do a bit of manual work such as grinding coffee beans, tamping them, or frothing milk, and to do each of these tasks right you have to bring your skill levels near to those of a barista.

This is a factor you cannot afford to ignore, especially when making a buying decision.

Moka pots are generally cheap. On average, they cost $30, though there are models that retail for as high as $100. All of them, however, only have a few parts, and they are not delicate, easy to break, or costly to replace. Your only other expense will be purchasing filters, which are incredibly cheap as well. 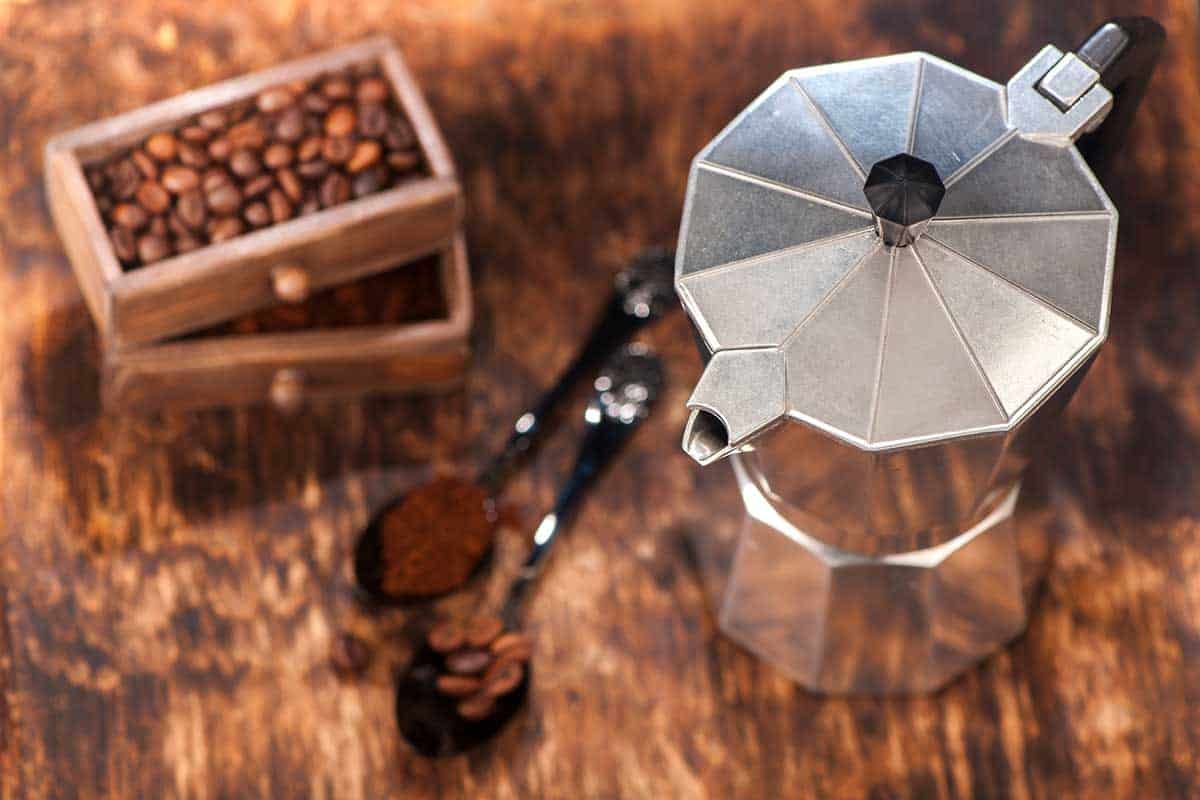 Depending on the model you opt for, you may have to buy extras such as a grinder, frothing wand, and cleaning supplies. Replacement costs are also high, but this should not be a concern if you take good care of your machine.

Both espresso machines and Moka pots make strong, balanced, concentrated coffee, but as a coffee connoisseur, you will want an option that effectively highlights the flavor profile of your different coffee beans.

Just to put this into perspective, Moka pot coffee is estimated to be 2 to 3 times stronger than regular drip coffee. As much as it’s intense and bold, some of the nuanced flavors are lost in the brewing process. You can still use it to make other beverages such as lattes and cappuccinos, but if you are keen, you will quickly notice that the resulting drink isn’t as strong and flavorful as you want.

Espresso machines, on the hand, pull shots that are 5 to 8 times stronger than your average cup of coffee. The high pressure used for extraction also helps to highlight not just the main but also nuanced flavors in your coffee beans. As a result, you can create a very flavorful, full-bodied coffee that won’t lose its richness even when mixed with other drinks.

Is One Better Than the Other?

Since these two are designed to generally make strong coffee, I would consider them rivals. Who wins, then? Going by the feature comparisons, espresso machines are the clear winner.

In addition to being fast in brewing and having the best mechanism for extraction, espresso makers can create rich, balanced, flavorful, and sweet coffee that could also be the base drink for creating other delicious coffee beverages.

You will, however, have to pay through the nose to own a decent espresso maker. It may not be helpful to go for a cheaper one that’s unable to pull that perfect shot; instead, you could opt for a Moka pot to serve you in the meantime as you save up for a decent option.

Also, if you travel or go on adventures a lot and you have to choose between these two, the most sensible option would be a Moka pot.