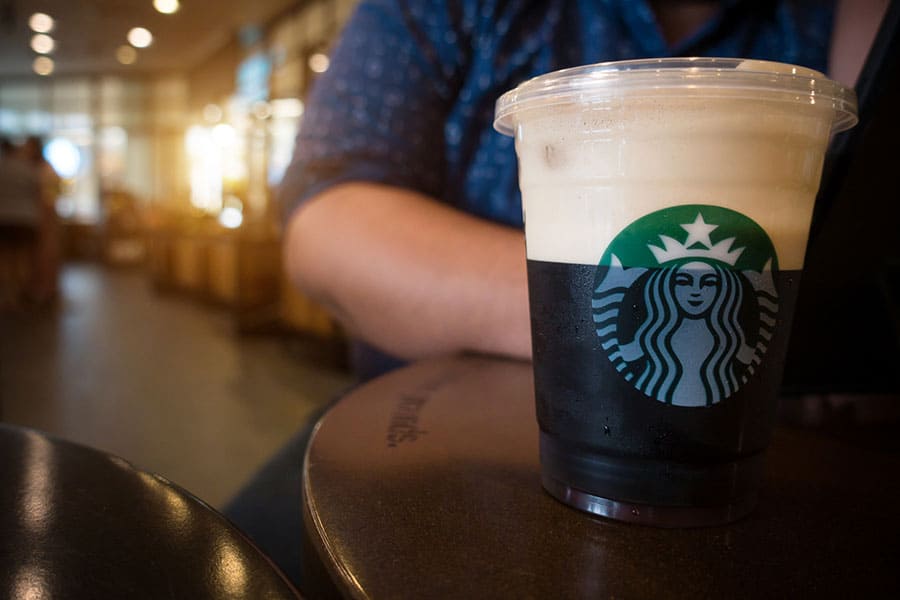 If you’ve gotten addicted to cold brew from Starbucks, you might wonder what sorcery has brought this ambrosia into existence. Are there any special techniques or equipment used? What coffee does Starbucks use for cold brew?

Starbucks regulars know only too well that the cost of their regular caffeinated pick-me-ups add up. There are ways to recreate their iconic coffee at home for less, especially their cold brew.

I’ve got some tips and tricks that I’m going to share with you about the type of coffee beans and the blend that Starbucks uses to make their cold brew. What you do with this information is up to you, but I would recommend experimenting in your kitchen to see if you can make something similar at home.

Why Is Cold Brew So Popular?

The popularity of cold brew has increased enormously over the last ten years. The brewing technique of steeping coarse ground coffee beans in cold water for around 14 hours makes the finished product less acidic than traditional hot brewed coffee. This has opened up a world of coffee to people who thought they didn’t like coffee because of the bitter taste.

The sweeter taste is perfect in iced coffee, but it is worth noting that the two are different products and shouldn’t be confused. You can read about their differences here. Iced coffee can often be too sweet for coffee lovers but cold brew is the perfect balance between acidic hot brew and overly sweet, iced coffee.

What Coffee Does Starbucks Use for Their Cold Brew?

What Beans Does Starbucks Use for Cold Brew?

The cold brew Starbucks creates is made from 100% Arabica coffee beans; however, the exact beans they use are top secret and are never disclosed. This means it’s probably not going to be possible to recreate the exact taste at home, but top coffee experts have made professional guesses and they’re confident that they’re pretty close.

For Starbucks to get their recognizable taste, they use a blend of beans from different regions. This makes it harder for other coffee chains to try and replicate their drinks.

When they make cold brew, they use a mixture of beans from Latin America and Africa in a medium roast.

The beans from Latin America bring citrus notes to the brew while the African beans give sweet, chocolatey notes to the drink. This blend is responsible for the well-rounded flavor of a Starbucks cold brew.

What Method Does Starbucks Use to Make Cold Brew?

According to insiders, Starbucks steeps their blend of coffee beans in filtered water. This is important to note if you want to make Starbucks-style cold brew because most people skip this step when they’re home-brewing.

Filtering the water removes any impurities. If unfiltered water is used, the taste of the finished product will include not only the essence of the coffee beans but also the flavor of whatever is in the water with them. You want to get the best flavor from your cold brew, so taking the time to filter the water is crucial.

Because Starbucks keeps insider secrets under lock and key, it’s hard to be certain about the method they use; however, they likely refrigerate the brew as it’s steeping. The benefit of this is that they can make it in larger batches in industrial fridges.

While a lot of online cold brew guides and recipes will tell you to steep cold brew for around 12 to 18 hours, Starbucks seems to have ignored that advice because they brew theirs for 20 hours. No wonder it costs more than a standard cup of joe.

What Is Starbucks’ Nitro Cold Brew?

It can be confusing enough to figure out what exactly a cold brew is as well as how and why we should drink it, but Starbucks has gone one step further and created a Nitro cold brew. They’ve always got to be one step ahead of other coffee chains; that’s what makes them so successful!

This is another twist on the cold brew phenomenon. Starbucks infuses their cold brew with nitrogen bubbles, hence the name. This makes the end product ice cold, which eliminates the need for additional ice which will water down the drink and make it taste weaker.

As well as lowering the temperature, adding nitrogen bubbles to their cold brew gives the drink a foamy top, similar to a beer.

The Nitro cold brew only comes in tall or grande sizes. This is because serving it in a large, or “venti” as you’d say in a Starbucks, makes the drink lose its well-known froth and bubbles. Without those, it just becomes a regular cold brew.

Is It Difficult to Recreate Starbucks Cold Brew at Home?

There are actually a few ways by which you can recreate the iconic taste of Starbucks cold brew in the comfort of your own kitchen. It all depends on the time you have available and how creative (and patient!) you’re feeling on that particular day.

If you’re truly not feeling up to the task of steeping your own cold brew and you want that caffeine fix instantly, get yourself down to your local store and see if they sell bottles of Starbucks cold brew.

When the coffee chain realized how popular their cold brew was, they jumped on the opportunity to create large, refrigerated bottles so everyone could enjoy it. Not everyone lives near one of their cafes, but now they don’t have to miss out.

You can now purchase pitcher packs of the same blend of coffee beans that Starbucks uses to make the cold brew they serve in their cafes. They’re available in-store or online and they come with 12 sealed packets of the blend. 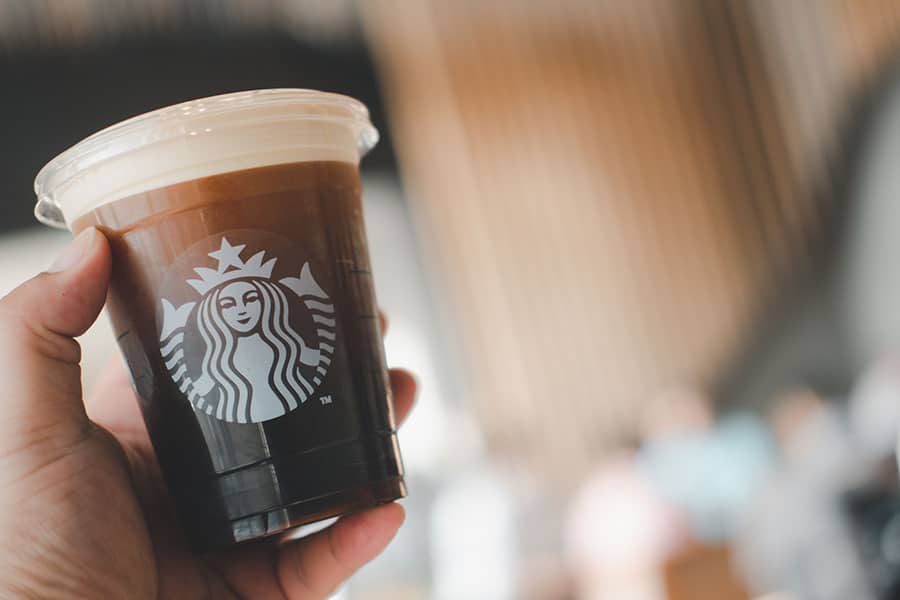 To make up a batch, take two of the packets and add them to four cups of water. Steep it in the refrigerator for 24 hours and then add three more cups of water to turn it into the same cold brew you’d sip in a Starbucks without the need to add cream or sugar.

Create a Batch Entirely From Scratch

If you’re up for some experimentation, you could create a cold brew that’s almost identical to theirs.

We know that they use a blend of Latin American and African beans, but even beans from the same region have different flavor profiles. If you fancy a challenge you can try various blends and have fun with the results. You might find one that you enjoy even more than the Starbucks original!

A good place to start is to look at the beans Starbucks sells and go from there. We have an article that features the 10 best Starbucks coffee beans to help you narrow down your choices.

Is It Possible to Recreate Starbucks Cold Brew From Scratch at Home?

You might not be able to recreate the exact taste of a Starbucks cold brew at home, but you should be able to get pretty close. Choose your favorite Latin American and African beans, make sure they have flavor notes of citrus and chocolate, and start experimenting.

Is the Nitro Brew Better Than a Standard Cold Brew?

This is all down to personal taste. Cold brew can be served warm if that’s how you prefer to drink your coffee. Simply add hot water or milk to it and the brew will be heated to the perfect temperature.

Nitro cold brew has to be served cold, as chilling the drink is the entire purpose of the nitrogen bubbles that are added to the brew. Because of this, there’s no need to add additional ice cubes or milk. This keeps the strong flavor of the brew and doesn’t water it down.

If you like your coffee cold and strong, you’d probably enjoy a Nitro cold brew.

Will Home-Brewing Save Money?

In the long run, it will.

The pitcher packs will definitely save you money because of the amount of cold brew you get from one pack. You can also bulk-buy the ready-made bottled brew which is cheaper than getting a cold brew from Starbucks every day.

If you’re starting with beans, this could cost more as you try and find the perfect blend. Once you’ve found it, though, you’ll be saving yourself a ton of cash.

Did We Discover What Coffee Starbucks Uses for Cold Brew?

Not exactly, but we gave it a good guess. It’s 100% Arabica beans and a blend of Latin American and African coffee. It’s not exact, and the only way you’ll truly get that Starbucks experience is to order from their counters.

You can create something very similar at home, though, whether it’s from scratch or using their pitcher packs. Either way, it’s going to be delicious and you’ll still satisfy your cold brew craving.