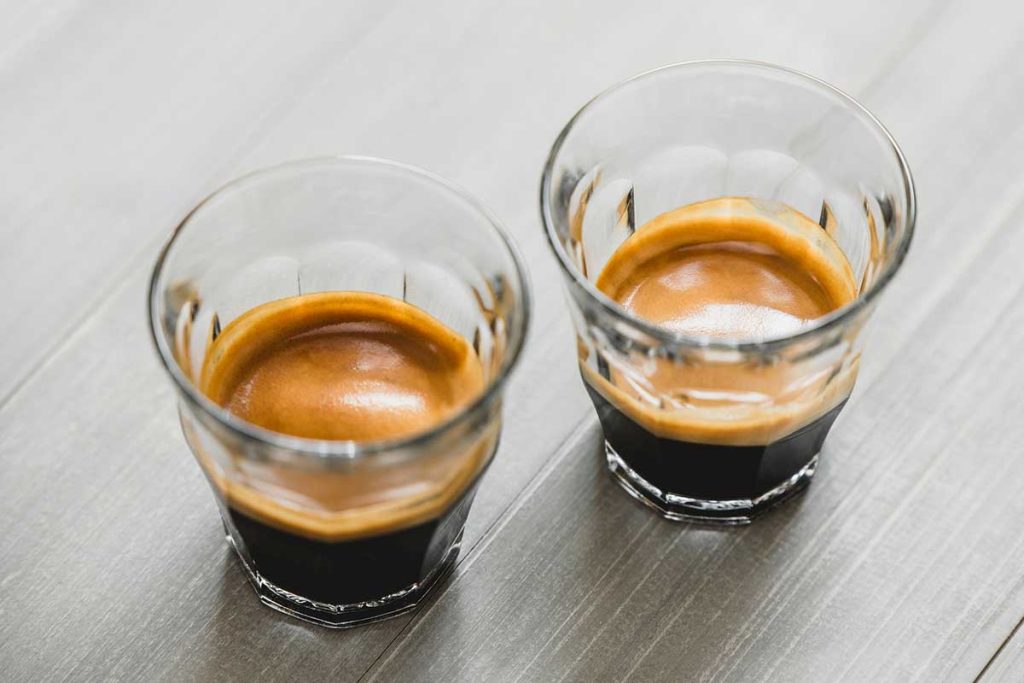 The world of coffee is wide and varied, which is probably why so many of us are still confused about the sizes of a single and double shot of espresso. I got tired of guessing, so today I’ll explain what I found when I looked into how many ounces is a double shot.

Every ounce matters in coffee making, so knowing how much espresso to use for any given recipe could just be the difference between good and bad coffee.

That’s not all you need to know, though, so I’ll start by looking at what espresso is before delving into the ounces in a double shot and how to make one with an espresso machine.

Without any further delay, let’s get into it.

What Is an Espresso Shot?

Espresso is rich, flavorful, concentrated coffee served in the form of shots, either single or double. Downing it in this state is the best way to fully experience its fullness, but if that’s not your cup of tea (pun absolutely intended), go ahead and try out any of the countless espresso drink recipes that will excite your palate.

Maybe you think that baristas are the only people who can make great espresso, but guess what? You can make it too, from the comfort of your kitchen (more about this later). To sum up the process, hot water under high pressure is usually forced through finely-ground coffee, resulting in a brew that’s bold in taste and rich in caffeine, with crema on top.

Alright, enough about espresso. Let’s talk about the shots. How many ounces are in a double shot? To start you off, I’ll explain what a double shot is.

A double shot of espresso is, as the name implies, double the size of a standard shot. Double what, though? Everything, it turns out. Even the amount of coffee beans used to make it is twice that of a single shot, not just the amount of water.

Some baristas make a double shot by doubling the coffee batch and then adding water, while others make two standard shots and then mix them. Some machines even include an option to pull a double shot without having to mix anything after it’s finished. Any method that uses double the coffee and double the water of a standard espresso will make a great double shot.

How Many Ounces Is a Double Shot?

First things first: the numbers I’ll share are not cast in stone. Different baristas and coffee connoisseurs will tell you what they believe to be the ideal weight of a double shot and the amount of coffee to use in preparing one.

Nonetheless, there’s a standard size you can hardly go wrong with and that’s what I’ll share with you.

A double shot of espresso weighs about 2 fluid ounces (60 grams). This is double the amount of a standard single shot, which is roughly 1 fluid ounce. Classic Italian espresso, however, has much less weight than that (0.85-0.95oz).

To get to that final weight, a single shot of espresso typically uses 0.2 ounces or thereabouts (approximately 7 grams) of finely ground coffee. Increase that twofold for a double shot espresso, and you will use 0.4 ounces (14 grams). As a result, the latter tends to be stronger and more caffeinated overall, even though each delicious sip will be the same.

The final weights could fluctuate not only based on the preferences and quantity of coffee used by the barista, but also based on other factors such as the crema breaking down and turning to liquid, how fast you stop your espresso maker’s pump, and more.

It may be hard to tell the volume of your espresso from observation, so you might want to get something to measure it if you are brewing from home.

Next, let’s briefly look at how to prepare a double shot of espresso.

Step 2: Remove the portafilter from the espresso maker. Wipe off any leftover grounds, and then purge it with hot water.

Step 3: Grind about 20 grams of coffee (or more if you want a stronger drink) to a fine grind size. Use a quality burr grinder like Fellow Ode or Baratza Encore if your machine doesn’t have a grinder built-in (or can’t produce a sufficiently fine grind).

Step 4: Measure 14 grams of finely ground coffee and put it into the filter basket, then distribute it evenly using your finger.

Step 5: Position the tamper on top of the grounds and then press it down to make sure they are compact and level. Spin it slowly to get an even bed for optimal extraction.

Step 6: Lock the portafilter back into the group head and then put in your preferred brewing settings

Step 7: Press brew and wait for the shot to drip into your cup. You can get more hands-on with this by timing the brew;  27-29 seconds is the sweet spot.

Step 8: Pull the cup from the drip tray and place it on the kitchen scale to measure the weight, just to be sure you got the measurements right.

The other alternative I hinted to you about earlier is to use 7 grams of finely ground coffee, but this will require you to do the brewing twice. Follow the same steps mentioned above and when you have your two shots, mix them to create a double.

How much caffeine is in a double shot?

Espresso generally has more caffeine per ounce (40mg) than other coffee beverages because it’s made with lots of coffee grounds and under high pressure, which makes it heavily concentrated. The finely ground beans also release more caffeine into the water.

A double shot of espresso carries 125-160 mg of caffeine. It could be on the lower or higher side, depending on the type of bean you use and where it originates from. Be careful not to go beyond the recommended 400 mg per day because too much caffeine has potentially harmful side effects.

Robusta has double the amount of caffeine found in arabica. You will also get more caffeine from beans grown at a lower altitude than from those from high altitude areas.

What is a triple shot espresso?

A triple shot espresso, also known as triplo, is one of North America’s most popular beverages. Just as the name says, this brew is three times the size of a single shot and is made using about 21 grams of coffee.

Standard filter baskets cannot hold all that coffee, so to prepare such a brew you will need a triple filter basket, or to pull them separately. You may also need a bigger portafilter to accommodate the basket. Grind size, extraction time, and the amount of water will need to be adjusted as well.

Triplo isn’t as popular as other espresso shots partly because it requires one to adjust to specific brewing and grinding settings every time they want to brew. Many people find the back and forth between different brewing configurations frustrating.

What should a good shot of espresso look like?

Pulling a perfect shot starts with choosing the right coffee beans for espresso, using the correct grind size, and tamping the beans properly. It’s not enough that you get the double shot ounces right; looks matter as well.

A perfect shot will be golden in color, almost resembling thick warm honey, as it steadily drips into your cup. Another thing that defines espresso is the crema, which is basically a foamy puff that floats on top of the beverage. You know it’s right when the crema is dark caramel in color and creamy in texture.

Don’t forget to check the puck (used coffee grounds) as well. When it’s firm, dry, and formed into a solid round shape, that’s the clearest sign that the grind size was perfect.

I believe that by now you know how many ounces are in a double shot. For those of you who skipped to the end, you need about 0.4 ounces (14 grams) of coffee grounds to pull one, and the resulting brew should weigh around 2 fluid ounces (60 mg).

Don’t panic if you fail to get the double shot ounces right on your first or second try. With a little practice you will get the hang of everything, but first, master the basics of how to use an espresso machine, then hone your brewing skills.

It may be difficult to tell if the double shot you have been served at a cafe or coffee shop has the recommended weight, especially if it’s been mixed with other ingredients to make an espresso-based beverage, but you can check other qualities such as the drink color and texture. If they tick the boxes, chances are high the barista got everything right.