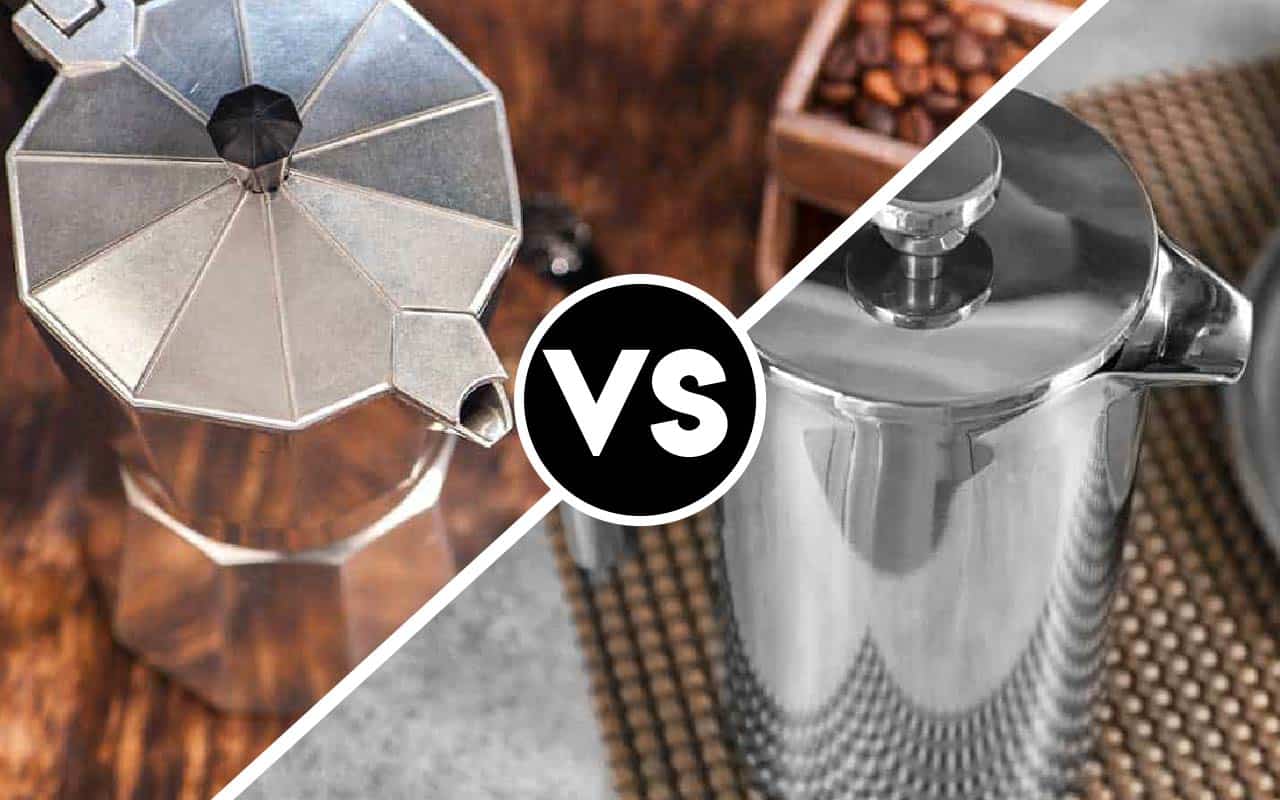 Some folks get confused about the difference between a Moka pot and a percolator. These two contraptions may look similar on the outside, but upon closer observation and investigation you’ll find that they are two distinctly different brew methods.

I’ll talk about them in brief below and then delve deeper to help you better understand both the percolator and the Moka pot.

Main Differences Between a Moka Pot vs a Percolator

The main differences between the Moka pot vs percolator are:

These two coffee makers may seem similar. But for a coffee connoisseur, any of the subtle or seemingly negligible differences could be the deal-breakers.

Do you like your coffee thick, strong, and very flavorful?  A Moka pot does that best. You could as well use the same coffee as a base ingredient in your other coffee recipes, from lattes and cappuccino to Americano. However, if you care a lot about ease of use and capacity, you have every reason to choose a percolator.

There’s more to learn about these two coffee makers if you truly want to understand them better and make the right decision. I break down every difference between the percolator and Moka pot below. But before that, let’s find out how Moka pots and percolators came about.

Percolator vs Moka Pot: An Overview

Even though Italians invented it, the Moka pot was named after Mocha, a port city in Yemen. Back when the European coffee culture was setting off, Mocha was a popular coffee marketplace.

Alfonso Bialetti, an Italian engineer, made the first Moka pot in 1933. Bialetti Moka Express, the pot’s original name, has stuck to date. It’s one of the most popular Moka pots today.

In Italy, the Moka pot is a must-have kitchen appliance in most households. The rest of the world has embraced it, too, from Latin and North America to Asia. Not only is it simple and affordable but also able to make coffee that almost rivals real espresso.

More manufacturers have since joined Bailetti in making the best Moka pots, but what hasn’t changed is the core design. This coffee maker comprises three main parts: a bottom chamber for storing water, a middle chamber/filter basket for holding the coffee grounds, and an upper chamber for collecting the brew.

After placing your Moka pot on the stove, the water will heat up, generating steam that rises up and through your grounds to extract coffee. Brewing will take between 5-6 minutes. Wait for a hissing (or gurgling) sound. Get the pot off the stove as soon as you hear that because that’s a sign that brewing is complete.

If you hesitate, your pot could heat up further and become difficult to handle or your brew could overflow. My recommendation is that you spare time to learn how to use a Moka pot before putting it to use. 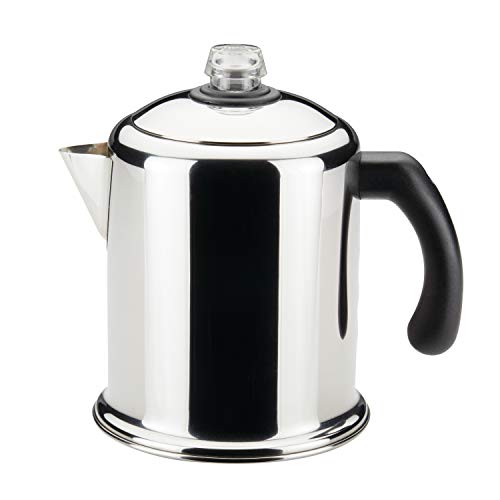 The percolator is much older than the Moka pot. Its history traces back to 1819 when Joseph Henry Marie Laurens, a tinsmith from Paris, invented one. There weren’t many coffee makers at the time so his idea to brew coffee by letting steam through a tube seemed so clever. The resulting drink was loved by many.

But as you can see, the Parisian percolator didn’t vanish. Lots of people still prefer to use it today and it’s just as popular as most of the older coffee makers.

A percolator works in a similar way as a Moka pot. With both, you load coffee and water into their respective chambers and then turn on the heat. For a percolator, the heat could be from a stove or electric coil.

There are fewer parts in a percolator than a Moka pot. You have a lower chamber that stores water, a coffee filter basket that sits near the top, and a pipe-like structure for passing the steam.

When the water heats up, it rises through the pipe and then spills out through a spout into the filter where it extracts the coffee. The resulting brew then drains back into the lower chamber and the coffee is re-brewed again.

Your coffee will therefore become stronger after every brewing cycle. Five to 7 minutes is the recommended time for a well-balanced, tasty brew.  If you leave the brewing to carry on, you could either damage the flavor or end up with over-extracted coffee. Just like with a Moka pot, take some time to learn how to use a percolator before putting it to use.

The brewing process for these two coffee makers isn’t the same and neither is the resulting brew. That’s why it’s important that you know what to expect before settling on the best option for you.

Moka pots brew coffee under low pressure (1 bar), but the resulting brew is still strong and concentrated enough to give you that cherished caffeine kick and serve as a base ingredient for making cappuccino, lattes, Americano, and other espresso-based drinks.

Percolators make regular coffee but under very high temperatures. It’s not as bold and flavorful as Moka pot coffee, but if you want nothing more than an average cup of joe, you will love it.

However, you have to be very careful with the brewing because the possibility of over-extraction is higher. You could add creamers, sweeteners, milk, or cocoa powder to neutralize the coffee or make other beverages, but the resulting drink will not be as sweet and delicious as one made from Moka pot coffee or real espresso.

Beginners and expert coffee lovers alike will find it relatively easy to operate these two coffee makers. You will, however, need some skills to get a few things right with the Moka pot.

First off, get the grind size right, to get the desired flavor and aroma.  Remember to spread them evenly on the metal filter for optimal extraction. 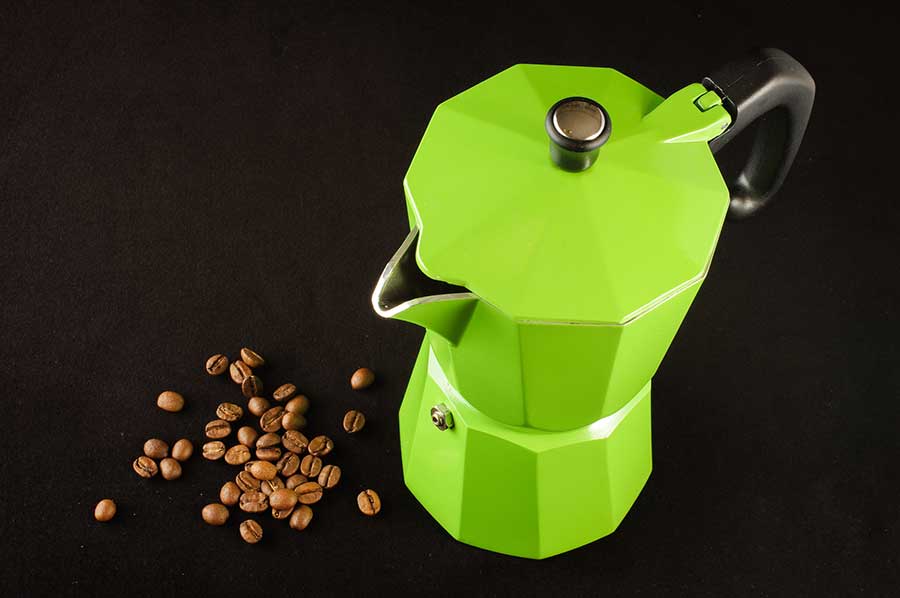 Next, make sure the heat is low to medium, and then be careful not to miss the hissing or gurgling sound. If you do, your  stovetop could become a mess and the pot will be difficult to handle.

It all sounds easy enough, but pay extra attention to the grinding and brewing. A small mistake is enough to destroy your coffee.

Just like with the Moka pot, get the right grind size for the percolator. Once you’ve loaded the coffee and water into their rightful places, replace the lid and turn on the heat. Your work is pretty much done. 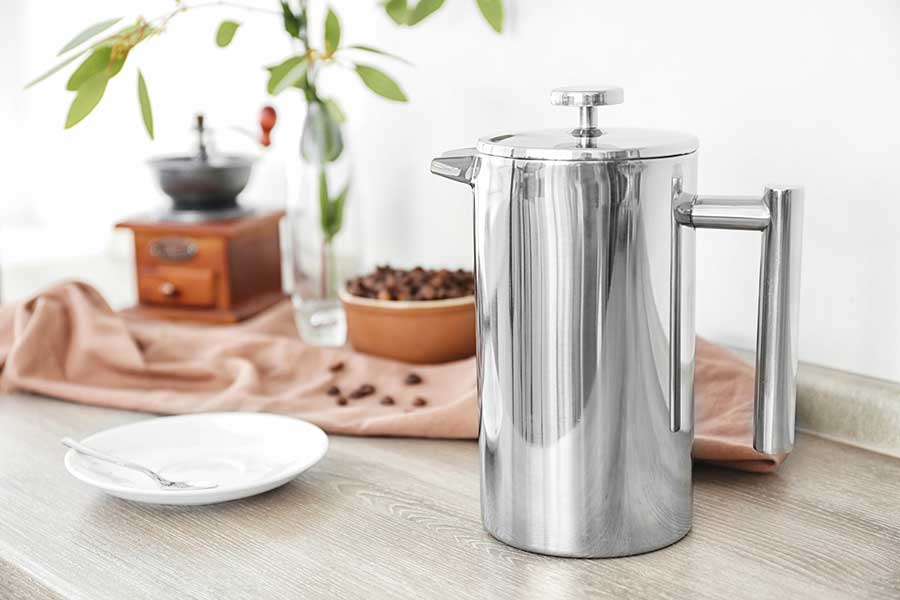 When filling the chamber with water, make sure it does not go past the coffee filter. You can let the coffee brew for as long as you wish, depending on how strong you want it.

Grind size affects flavor. That’s why it is important that you first learn how to grind coffee beans and ensure you get the size right. As I’ve said, Moka pots and percolators don’t share the same grind size.

Moka pots need a fine to medium grind for optimal extraction. When there’s plenty of surface area exposed to the water, extraction will be fast and better for the recommended brewing time. A coarser grind would mean slow extraction and therefore weak or watery coffee.

Percolators work best with a coarser grind. Because the coffee has to steep, the larger surface area allows for the right amount of flavor to be extracted for the given brew time. A finer grind would mean faster extraction leading to bitter coffee.

Winner: Neither wins on this front. Each works as designed to achieve desired outcomes.

For the single coffee drinker, a coffee maker that brews one cup would be fine. But when you have friends over or have a family who also partake, you’re better off with a coffee maker that can make several cups in one go. Both of these products can do that, but there’s more you should know.

Moka pots have no fixed capacity. Some can make two cups, while others will brew enough coffee for 12 people. Please note that the cup size, in this case, refers to the espresso size and not your average coffee mug. As you might have guessed, most of the higher capacity Moka pots cost more than those with a two-cup capacity.

Percolators too offer various cup sizes, ranging from 2 to 12. However, unlike Moka pot cup sizes, you get a full mug with a percolator. A trick to doubling the capacity is to add more water as the brewing goes on. This saves you having to brew again like you would have to do with the Moka pot.

Which Is the Better Brewer?

The moment we have all been waiting for is finally here! Which is the better of these two time-tested coffee makers?

Both coffee makers are affordable, convenient to use, easy to clean, and take almost the same amount of time to brew. But Moka pots make stronger coffee that doubles as a base ingredient for other recipes.

In my opinion, in the end, I just want a decent cup of coffee, or else, why bother? So taste trumps convenience any time. It would be such a waste to go through the trouble of getting the beans you like and taking the time to grind them fresh if your extraction method will ultimately fail you.

So I say, go ahead and get a Moka Pot.