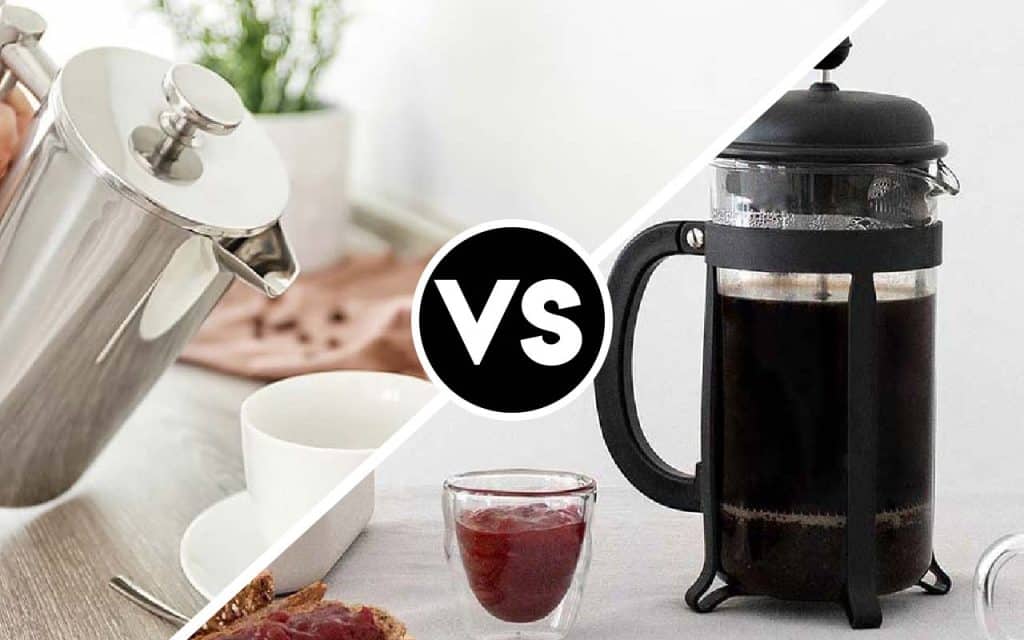 There are a few activities that send us to our happy place, and for me, it’s a good cup of coffee. But it needs to be brewed right to taste right. With all the ways to brew coffee, the percolator vs French debate may come up.

As someone who owns both a coffee percolator and a French press, I have had experience making coffee using both these brewing methods, so I can tell you what I’ve learned about them. There are advantages and disadvantages to both.

The features of each brewing method are quite interesting, but it all comes down to the type of coffee you enjoy. This is a subjective matter, so the ultimate decision lies with the person making the coffee. There is, however, key information that could prevent you from purchasing a product that would not meet your coffee-making needs.

If you are unsure about the correct coffee maker, then you have come to the right place. Let’s jump right in.

Main Differences Between a French Press vs a Percolator

The main differences between a French press vs a percolator are:

When it comes to the amount of coffee you can brew at a time, remember that it depends on your needs. For large families, you may have a better chance with a percolator since the capacity is larger. However, if you need your coffee to be finished faster, then the French press is a better option. When it comes to taste, you need to decide what type of coffee is better for you and your family. Do you want full-bodied or bold? These two brewing processes have distinct features that set them apart.

Let’s look further at each one so you can get a better understanding of the type of coffee they can make.

Both the French press and the percolator share a unique history. It’s important to note that percolators come in both electric and stovetop forms. French presses are basically the same with slight variation. There are many names for a French press, like a press pot coffee plunger or coffee press. It was designed by an Italian man called Attilio Calimani in 1929 Milan. French presses are a staple in many modern kitchens and have seen a few updates throughout the years.

However, it still has its famous cylindrical design and is fairly easy to use. You typically use coarsely ground coffee in a French press and hot water. It is important that the water is only hot and not boiling when you add it to the French press. You then stir the grounds for a little while.

Proceed to place the lid on the coffee so that the steeping process can begin. Once the desired coffee strength is attained, you then press the plunger filter so that the coffee grounds end up at the bottom. Flavorful coffee remains at the top and is poured out in your favorite coffee cup.

The French press uses a simple method to give flavorful coffee many people prefer over other brewing methods. It is also not very expensive and a few manufacturers are Mueller, Veken, and Bodum.

These are a few tried and tested products that work quite well. 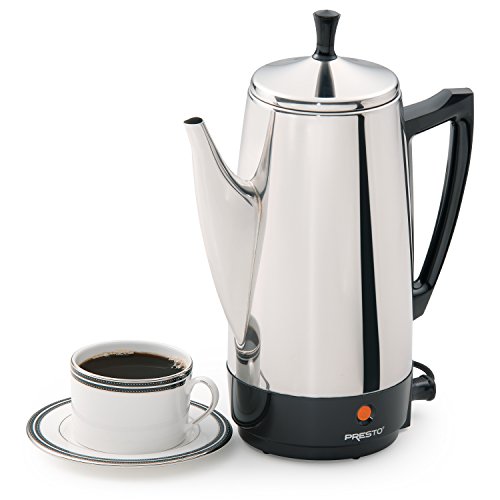 Percolators were invented in the 1800s, so they have a long history. Back then, it was a huge improvement since coffee was made by just boiling the grounds and water. There have been many improvements to its design, but the essential principle remains the same.

Percolators work by brewing coffee with a water chamber at the base where the brewed coffee is held. The grounds are placed in a metal basket that has perforations allowing the flow of water. When the water is heated at the bottom, it causes pressure that pushes the water up through a pipe in the center. This brewing method is known as gravity percolation.

Percolators have seen many improvements including its shift to electric versions which occurred sometime in the 1920s. Percolators should not be confused with moka pots because these brewing methods are quite different. With percolators, water is sent through the coffee grounds many times which creates a stronger brew.

Because this creates a bold flavor, many people believe that percolators create a bitter-tasting coffee. Nonetheless, some people revel in the strong taste that a percolator can provide. Many campers still take their stovetop percolators with them on their camping trips.

These are a few exceptional stovetop and electric percolator options:

Let’s face it, we all want great-tasting coffee, but sometimes it’s a hassle to make. That’s why coffee makers that are easy to use are in such high demand. You don’t want to have to jump through hoops just for a great cup of coffee.

So which brewing method is easier between the percolator and the French press? The answer becomes a bit complicated when you consider the fact that percolators have gone through a few upgrades that included an electric capability. Electric percolators are a bit easier to use than their stovetop counterparts.

Adding an electric feature to the percolator has made it more user-friendly so that you can just add the coffee grounds along with the water and allow it to brew. The electric feature has taken the guesswork out of timing and eliminated the temperature checks that must be done with a stovetop percolator.

When using a stovetop percolator, you need to be aware that the water must reach a certain pressure point where the steam will rise, but you must not allow it to burn. This can seriously take the flavor out of the beans and leave you with bad-tasting coffee. Electric percolators even have features that allow the brew to be kept warm so that coffee will always be ready.

However, with a French press, the main thing that you have to look out for is the amount of time the coffee is left to steep. This is pretty simple when compared to a percolator of the stovetop variety. You use the French press by mixing hot water and grounds briefly, then allowing it to steep to get rich, flavorful coffee.

Cleanup is also easier with the French press as opposed to the percolator. This applies to both the stovetop and electric percolators. The French press has the advantage when it comes to ease of use. 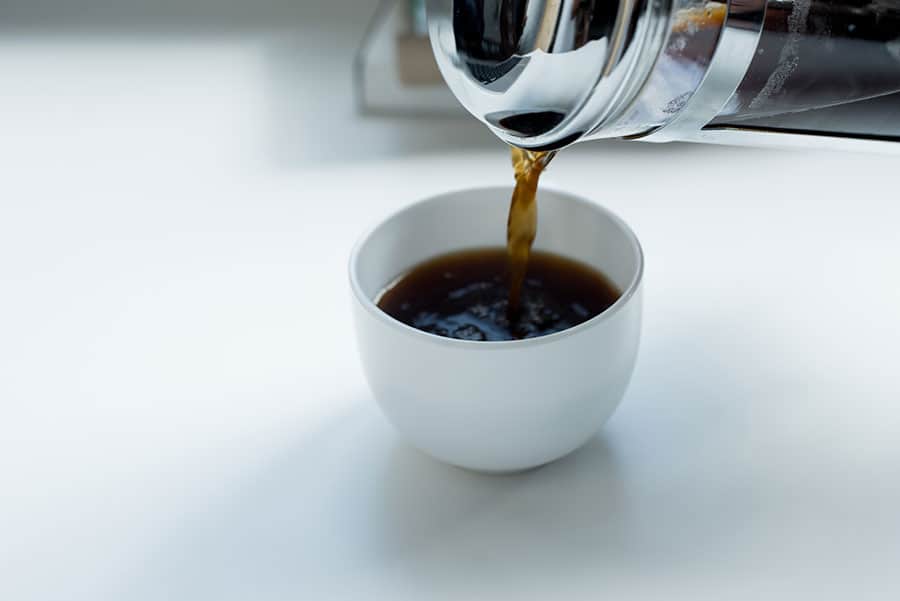 Have you ever had one of those mornings where you can’t function until you have your coffee? Yes, we’ve all been there. On these occasions, we need our coffee fast, so the time it takes to prepare coffee matters!

The French press is able to brew coffee a bit faster than a percolator, but I should mention that electric percolators are quite fast as well, so this question comes down to whether you have an electric or stovetop percolator.

With stovetop percolators, you can expect to have that steaming cup of joe in your hands after waiting about ten minutes. However, electric percolators can make your coffee in less than five minutes. This depends on the amount of coffee you are brewing, of course, but comparatively, it is undoubtedly less time than a French press.

A French press would be unable to make you coffee in less than five minutes.

However, its time beats the stovetop option because it typically takes between six and eight minutes overall. It also depends on the amount of coffee that you are brewing. If you need to make about 15 cups of coffee in a French press, then you can expect to spend a longer time preparing your coffee.

Because the percolator has both the electric and stovetop option, the clear winner is difficult to proclaim. Nevertheless, if we compare the two non-electric options which are the stovetop percolator and the French press, we will have our winner as the French press.

Coffee connoisseurs like myself enjoy all the subtle nuances in taste that different coffee grounds can deliver. But the brewing process can also cause complex changes in the taste and texture of the coffee. Coffee makers that can provide this versatility are considered to be top-notch.

When we look at both of these coffee makers, we observe that the French press can give a higher level of versatility in the brewing process.

Percolators, on the other hand, are well-known for their reputation for making potent coffee, and this suits the taste of many. When it comes to versatility in the taste and texture, however, a percolator does not offer much.

In all honesty, the most you can get out of a percolator when it comes to versatility is allowing the brew to become a bit stronger by allowing it to heat up a bit more. Conversely, French presses allow the maker to tweak the coffee along every step of the brewing process.

Of all the features, taste is perhaps the most important. Because why else are we all here? We’re here because we want great-tasting coffee! This would lead to the question, do percolators create better-tasting coffee than French presses and vice versa?

Well, the thing about taste is that it is up to interpretation. Nevertheless, we cannot deny that percolators create a bold flavor that many consider to be bitter. When coffee is brewed correctly in a percolator, you can end up with a rich, flavorful brew that is not bitter but strong nonetheless. The aroma from a brew like this can wake the dead.

The French press will give you an aromatic full-bodied brew that is flavorful but does not leave a bitter aftertaste. So in this case, there is no clear winner because it is a matter of preference.

Winner: both the French press and the percolator

We all have different needs. Some of us belong to large families of coffee drinkers, so we need a coffee maker that can give us the maximum amount of cups in a single brew.

If you need to make large amounts of coffee in one brew, I am sure you will be interested in knowing which of these methods can provide this. Well, it depends on the make and model of the coffee pot in question.

We usually see percolators that can serve many people at one time which gives them a slight edge over the French press.

French Press vs Percolator: The Winner

Drum roll, please! The French press is the clear winner because they outperform in most of the categories we discussed. However, some of these features may be more important to you than others.

For example, if you like strong coffee with a bolder taste, then you would choose the percolator over the French press. Percolators are also able to give you more coffee in one brew because they generally have a larger capacity.

However, the French press can offer ease-of-use that will outpace a percolator in most cases. So the final decision lies with you here.